The Gerald R. Ford aircraft carrier, built with 21st-century technology throughout, finally retires the steam and hydraulic-powered launch catapults that date back to the 1950s in favor of a modern alternative: electromagnetic launch.

Designated CVN-78, power for this mammoth ship comes from two nuclear reactors and four propeller shafts that drive the 224 million pound (100,000 tonne), 1106-foot (337 m) long ship at speeds up to 30 knots (about 35 MPH, 56 km/h). The nuclear reactors developed by Bechtel Corporation produce steam to drive turbine generators, which deliver about 125 MW of electrical energy to power the ship’s systems and 350,000 shaft horsepower to drive the ship forward.

The Navy ordered this ship from Newport News Shipbuilding on Sept. 10, 2008. It launched from dry dock into Virginia’s James River in November 2013 and entered active duty upon commissioning in July 2017. This is the first of 10 Gerald R. Ford-class carriers planned, and each has an expected 50-year life. This new class replaces Nimitz class carriers, which will be decommissioned as subsequent Ford-class ships enter the Navy’s inventory.

A Quick Look-Back at Catapult Systems

In the opening years of the 20th century, aviation pioneer Samuel Langley used a spring-operated catapult to launch aircraft from his houseboat. The Wright Brothers experimented with a catapult based on a weight and derrick system in 1904. 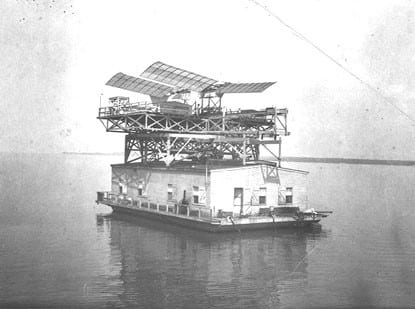 In July 1912, the U.S. Navy launched its first aircraft using a catapult system affixed to a dock in Annapolis, Maryland. After much experimentation using gunpowder and flywheel designs, a gun powder-powered catapult launched the first aircraft from a ship at sea, the USS Langley in 1924. That design became popular on both cruisers and battleships. However, the sudden impact of an explosive charge taking the plane almost instantaneously from stationary to 100 feet per second or more exacted significant stresses on the primitive airframes of those days.

Steam power, which dates to the beginning of the Industrial Revolution, is a complex system that requires a great deal of maintenance. Every aircraft launch on steam-power U.S. Navy carriers requires about 1,350 pounds (615 kg) of steam. Pumps move that massive volume of steam from the nuclear reactor on modern ships or the ship’s boilers on older ships. Some 3,000 gallons of fresh water — which must be desalinized at the cost of significant electrical power — stop the catapult at the end of its power stroke. That’s done by having the catapult slam into the water braking assembly, which decelerates it to a complete stop in about 5 feet. That extraordinarily fast stop dissipates a great deal of kinetic energy, but the massive water brake design is enough to prevent damaging the ship’s structural integrity.

A linear induction motor (LIM) is the mechanism that launches aircraft on the Gerald R. Ford (CVN-78). These electric motors produce linear force and motion rather than rotational torque.

Moreover, because the stator and the moving component (called the rotor in rotating motors) are not in physical contact, there are no losses due to friction. Likewise, the stator and rotor themselves are solid-state components with no moving parts. These factors drastically reduce the need for maintenance. In the design of CVN-78, the Navy required many updates that would improve the quality of life for the Sailors on board. The LIM solution is an important contributor to that requirement.

Another improvement this new LIM technology offers is the ability to program the thrust needed for aircraft of differing weights. With steam catapults, the precise amount of steam required to safely launch a warplane had to be “dialed in” using pressure valves and gauges. With too much steam pressure, the catapult could tear the nose gear off the plane and cause a crash; too little pressure and the plane wouldn’t become airborne and would fall into the ocean. The LIM design, in contrast, uses computer controls that adjust the catapult thrust to the level needed for each aircraft weight. Thrust is continuously adjustable and can safely launch even very lightweight UAV drones — while steam catapults cannot be “dialed back” to suitable lower thrust energy levels.

When setting up for a launch, operators use control consoles to program the catapult for the specific aircraft involved. At the moment of launch, power systems release stored electrical energy to the LIM to drive the aircraft forward. Following the launch, the ship’s power recharges those storage systems. It’s essential to store energy for each launch because the ship’s electrical system on its own is insufficient to power a multi-ton aircraft into the air. The energy released to the catapult in the 2-3 seconds it takes to launch is about 135 kWh (484 MJ). That enormous, nearly instantaneous release of energy is enough to accelerate a 100,000-pound (45,000 kg) aircraft to 130 knots (150 MPH, 240 km/h).

The workhorse is the linear induction motor itself. It is built with a row of stator coils. When they’re energized with three-phase power, the LIM accelerates the carriage along the track. The amount and frequency of the alternating current determine the thrust and speed of the carriage. As the carriage moves along its track with the aircraft in tow, only the section of coils surrounding the carriage receives power at any instant in time. This minimizes reactive losses.

Litz wire is another design choice that further reduces losses when such huge currents flow through the stator coils. Litz wire is made by weaving or twisting many thin strands of insulated wire together in a specific pattern. The pattern places each strand at the outside periphery of the conductor and at its center in equal measure. Multiple bundles of fine twisted wire can each be twisted further. This unique twisting method gives Litz wire the ability to minimize two kinds of AC losses: skin and proximity effects.

This new EMALS technology is destined to replace steam catapults altogether. The Gerald R. Ford (CVN-78) uses four LIM catapults, which will become standard equipment on carriers CVN-79 through CVN-81 (the John F. Kennedy, Enterprise, Doris Miller) and yet to be named CVN-82.

An EMALS is less massive and requires less space than steam catapults. Their maintenance and manpower requirements are a fraction of what’s needed for steam, and this high tech system controls launch performance with more precision than steam. Best of all, EMALS fit in perfectly with the Navy’s plan to move toward fully electric ships.

Want to see a Navy test of the EMALS aircraft launch system in action? Check out this video.

Use TRUE-Q™ Litz Wire Design for Your Next Project

New England Wire Technologies is a privately held, employee owned company with a rich history dating back to 1898. Our Lisbon, NH facilities consist of over 385,000 square feet of manufacturing, quality/testing, tooling/machine fabrication, and office space.