The term “wireless power” may sound incongruous at first blush, but it is a technology projected to continue growing as much as sixty percent compound annual growth through the 2020s reaching $22 billion in sales, according to analysts. Litz wire has become the choice of OEMs building wireless power systems because it dramatically reduces AC power losses, a key consideration when the goal is to transfer electrical energy wirelessly. 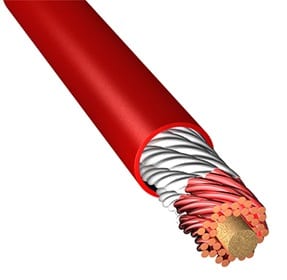 A wireless power system allows a source of power and an electrical load to be connected without a direct, wired connection. Just as current running through the primary windings of a power transformer induces current in the secondary windings, wireless power systems use two independent wire coils to convey power from a “transmitter” to a “receiver.” It’s Faraday’s law of induction at work.

Typically, wireless power transmitters and receivers are paired together by their manufacturer. Today, Apple, Samsung, Dell, LG and many other OEMs sell consumer devices with embedded power receivers. Recharging a smartphone or tablet becomes a simple matter of placing the device on a charging pad. At present, the principal market for wireless power systems targets the consumer market—smartphones, tablets and wearables—although automotive, medical appliances, satellites and other segments are also engaging wireless power.

Today, two incompatible technical standards for implementing wireless power exist, forcing product OEMs to choose one or the other. Some OEMs straddle the divide, manufacturing certain products compliant with one standard and others compliant with the alternative. The Wireless Power Consortium champions a technical standard known as Qi (pronounced “chee,” which references the Chinese term denoting “life force.”) The alternative standard is defined by the Air Fuel Alliance.

In addition to the inductive transfer of energy noted above, some wireless power systems use resonant coupling. Those systems have an LC circuit in both the transmitter and receiver. When the receiver is placed within about ¼ wavelength of the transmitter, its resonant circuit “rings” with an oscillating current the receiver’s LC circuit picks up. Resonant systems are capable of power outputs ranging from a few watts to several kilowatts with efficiencies greater than 80 percent. Proponents of resonant design point to its advantages over purely inductive power transfer: the ability to charge multiple devices with one charging pad, and greater flexibility in where the device to be charged is placed relative to the transmitter.

According to Faraday’s law, the induced EMF in a closed circuit is proportional to the rate of change of the magnetic flux affecting the circuit. For this reason wireless power systems use radio frequency current which allows the transfer of more power than, say, a 60 Hz current.

Wireless power systems are appearing in venues where consumers congregate. Hotels, airports, restaurants, cars and corporate offices boast tens of thousands of wireless power systems. These installations give consumers relief from “battery anxiety”—the fear of running out of power when it’s needed most. McDonald’s, Marriott, Starbucks and others have added wireless power to their facilities to differentiate themselves and please customers.

Charging pads and charging transmitters are also being integrated into other systems. Dell, for instance, sells a computer monitor that charges cell phones; a well-thought-out and ergonomic idea. More than three dozen automobile models now include charging pads in their center console that alleviate fumbling with wired chargers while driving.

While this wireless power market if burgeoning, it is based—after all—on a 19th century discovery of electromagnets and induction. What makes it new, however, is the predominant use of Litz wire.

Litz wire gets its name from the German litzendraht, which means braided or stranded wire. Litz wire is made by weaving or twisting many thin strands of insulated wire together in a specific pattern. The pattern places each strand at the outside periphery of the conductor and at its center in equal measure. Multiple bundles of fine twisted wire can each be twisted further, as shown in the illustration. This unique twisting method gives Litz wire the ability to minimize losses from two kinds of AC losses: skin and proximity effects.

When DC current passes through a conductor the current density is fairly well distributed throughout the cross-section of the wire. However, when AC current flows, current density increases at the circumference (edge) of the wire much as it would if the wire were a hollow tube. This skin effect increases the wire’s AC resistance in direct proportion to the frequency of the current. For example, with a 5 kHz current flowing through a conventional wire, the current density is largely confined to the outer one millimeter of the conductor, while at 5 MHz it flows only through about .03 mm. These measures are known as skin depth.

Because all wireless power systems use inductors in their transmitter and receiver components, the proximity effect can pose design challenges. An inductor is built of windings that lie essentially parallel to one another. When an AC current flows through an inductor, the alternating magnetic field induces eddy currents in nearby conductors. Those eddy currents alter the distribution of current flowing through them.

This effect can increase the AC resistance of the inductor by a factor of ten as compared to its DC resistance. In wireless power systems that use resonance to transfer energy, proximity (and skin) effect losses reduce the Q Factor of the LC circuit, broadening the bandwidth and reducing energy transfer efficiency. While several strategies can minimize these losses, Litz wire is usually the best and more economical solution.

Litz wire uses individual, insulated strands each with a diameter less than the skin depth at the frequency used. Skin effect losses are essentially eliminated because current flows through the entire cross-section of each individual strand. Further, the method used to twist and braid individual strands into bunches and cables places each strand equally at the periphery and at the center of the finished cable. This reduces eddy currents and proximity losses.

New England Wire Technologies has pioneered the design and manufacturing of Litz wire. Our website provides tools engineers can use to specify Litz wire based on the RMS current it will carry and the frequency to be employed. Visit these pages to learn more.

New England Wire Technologies is a privately held, employee owned company with a rich history dating back to 1898. Our Lisbon, NH facilities consist of over 385,000 square feet of manufacturing, quality/testing, tooling/machine fabrication, and office space.